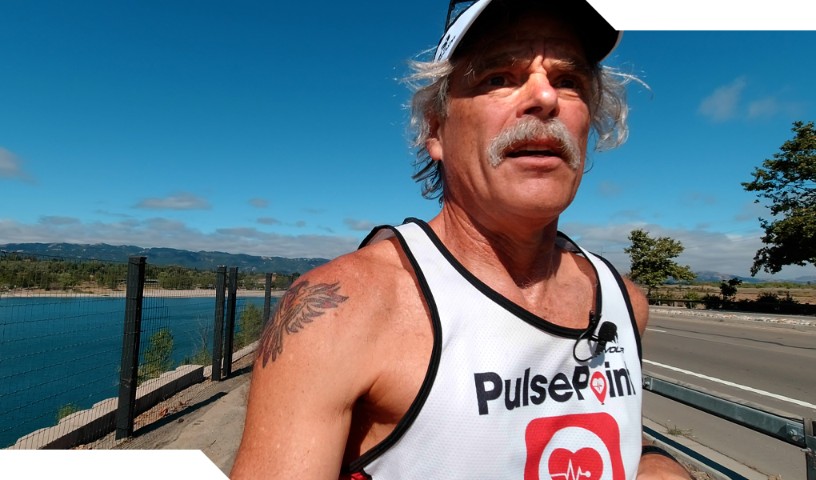 “It’s not just an app on your phone. It’s about saving a life.”

I’m a triathlete and marathon runner. I have a passion for it. But I kind of fell into it by accident. I was running and training for a marathon and my wife, Trish, was going to do an Olympic triathlon in Hawaii.

They all seemed to be having a lot of fun. And I was pretty miserable running 16 miles along the lava rock. I thought, there's got to be something to this whole tri thing. So, I fell into doing triathlons and I absolutely loved it. That’s also how I came to realize that life is really short and you have to make sure you live each moment.

I was training for an Ironman two years ago, when I collapsed with cardiac arrest. But thanks to an app on someone’s phone, I am here today. Now I spend a lot of my time making sure that people have the PulsePoint Respond App on their phones, because it saved my life.

When someone calls 9-1-1, it alerts anyone in the vicinity with the app on their phone that there may be a person needing CPR nearby. So, if you know CPR, and it happens to be close to you, you can help – and maybe save a life.

It happened in June of 2019. I was training for an Ironman and we were out at Shadow Cliffs Recreational Area, between Pleasanton and Livermore, California. We swam in the morning and then went out and did a 56- to 60-mile bike ride together.

I wasn't feeling great. But I just kind of figured it was an off day. When you're training so much, there are days like that. And you wonder why you got out of bed. So, I chalked it up to just having one of those days.

I got off the bike and we came in and then went out for a run. But as I was running, I just didn't feel right. I remember seeing people as I was running by. I remember looking to the lake and thinking I’ve got less than a half a mile to go. So just suck it up and finish. There will something cold and chocolate milk at the end. Just finish.

And then I went down.

Filling in the gaps

That’s where Trish has helped me fill in the gaps.

She told me I was in front of her on the trail when she noticed a commotion ahead. Her first thought was that it was a bike crash – because it was a multi-use bike and running path. But she didn’t see a bike. Then she got a feeling and asked our friend to run ahead and make sure it wasn’t me.

When our friend didn't answer fast enough, she yelled, “Is it Al?"

He said, "Yes." And she said it took her breath away. She ran to me and I was on the ground, unresponsive. There were a few people there, another friend of ours and two strangers. She said she could see my eyes rolling back and kept telling me, "Oh, hell no, you're not going anywhere."

One person was administering CPR. Another, whom we later found out was Juliana Schirmer, had called 9-1-1, which triggered the PulsePoint alert. That brought two lifeguards from the nearby lake with AEDs. And two firefighter cadets saw what was happening and stopped. They all took turns performing compressions and counting.

When the paramedics arrived, they put a mainline in my shin and shot me up with epinephrine. I was probably out between six and seven minutes. Clinically dead.

The next thing I remember is waking up in a hospital.

I remember waking up and them asking me questions like, “Who are you?” Thankfully, I knew who I was. But it took a while for it to register what happened. I was in shock.

Two months later, I got a chance to meet the people who saved my life. And that’s the first time I really heard about PulsePoint.

I'm still trying to piece everything together. I had always said, “Hi!” to the lifeguards, but I had not met any of them. I had not met Bill and Juliana Schirmer, the first responders, or the two cadets who showed up.

When I heard about the app, I felt like I needed to do something.

There is a reason I survived. And I believe there's a reason I'm still here – and that’s to become an advocate for learning CPR and getting involved. You can’t just sit on the sidelines.

Sometimes, you're given a second chance. I've kind of had a “second birthday” and this is when I look back and know I've got to make a difference.

One of the things that came out of this was people wanting to do something. The husband of one of the principals at the school district where I worked is a firefighter and EMT. He offered to do the training to get people CPR certified. Over 90 percent of the staff in the district got CPR certified. And they did it because they wanted to make a difference.

We also helped launch the app in Marin County, where we live.

For counties or areas that don’t have PulsePoint, it’s critical to have this. Sure, there's a cost to implement anything. But instead of having just the fire department or just the EMTs, you are now mobilizing your own community. You have people out there who are CPR-certified who can help.

They can give you that critical time that allows the EMTs to get there. It's those minutes – and all the people who responded – that bought me that time.

If it wasn't for those people, according to the doctors and my cardiologist, I would not be here.

It’s not just an app on your phone. It’s about saving a life.

That brings me back to the reason for counties needing to have this. It really comes down to making the people around you and your community part of your force. They will buy those minutes or seconds – that time to get the responders there. You're saving people's lives.

Getting back to it is important to me. Since the cardiac arrest, I’m just enjoying every moment. Before, I was in a competitive mode – always trying to figure out how to better my time, be stronger. Now, the passion is just about getting out there and enjoying it.

I'm not a great swimmer, but I can swim. Once I hit the bike, I just take it all in. I check the scenery out, see other people. And I try to be as encouraging to others.

This last weekend was a tough weekend for me because it really hit home what a miracle it was. We lost a friend of ours recently. He was doing what he loves. He's somebody I've coached with and a dear friend. And he passed away from cardiac arrest. While running.

He was doing the Mount Hood to the coast and he was out on his second leg of the relay. And he had a cardiac arrest. Somebody came. But it was so far away and by the time people could get to him, he was gone.

Like Trish said: Time matters. And this app buys time.

Al Hart is a retired technology director, marathon runner and triathlete. And Trish Hart is a triathlete and a retired elementary school teacher. Al and Trish, have become advocates for CPR training – and for the PulsePoint App since Al survived a cardiac arrest while training for an Ironman race.

Never miss an update from your network

By clicking Submit, you consent to AT&ampT sending you email about FirstNet services at the address you provide, even if you have previously opted out of receiving AT&ampT marketing emails.

By clicking Submit, you consent to AT&ampT sending you email about FirstNet services at the address you provide, even if you have previously opted out of receiving AT&ampT marketing emails.

This site uses cookies and other tracking technologies. These help the site function better. They also help us improve it. This data gives us feedback on how you use our products and services, helps us develop promotional and marketing material more relevant to you, and allows us to connect you with apt content from third parties. Read more about cookies and how to manage your settings here. For information specifically applicable to users in the European Economic Area, please click here.

Please provide the following information to access your document: